A Psalm of David, when he changed his behavior before Abimelech; who drove him away, and he departed.

1 I will bless the LORD at all times: his praise shall continually be in my mouth.

2 My soul shall make her boast in the LORD: the humble shall hear thereof, and be glad.

3 O magnify the LORD with me, and let us exalt his name together.

4 I sought the LORD, and he heard me, and delivered me from all my fears.

5 They looked unto him, and were lightened: and their faces were not ashamed.

6 This poor man cried, and the LORD heard him, and saved him out of all his troubles. 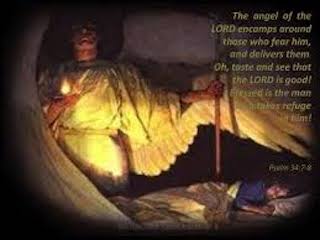 7 The angel of the LORD encampeth round about them that fear him, and delivereth them.

8 O taste and see that the LORD is good: blessed is the man that trusteth in him.

9 O fear the LORD, ye his saints: for there is no want to them that fear him.

10 The young lions do lack, and suffer hunger: but they that seek the LORD shall not want any good thing.

11 Come, ye children, hearken unto me: I will teach you the fear of the LORD.

12 What man is he that desireth life, and loveth many days, that he may see good?

13 Keep thy tongue from evil, and thy lips from speaking guile. 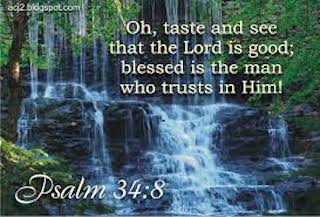 14 Depart from evil, and do good; seek peace, and pursue it.

15 The eyes of the LORD are upon the righteous, and his ears are open unto their cry.

16 The face of the LORD is against them that do evil, to cut off the remembrance of them from the earth.

17 The righteous cry, and the LORD heareth, and delivereth them out of all their troubles.

18 The LORD is nigh unto them that are of a broken heart; and saveth such as be of a contrite spirit.

19 Many are the afflictions of the righteous: but the LORD delivereth him out of them all. 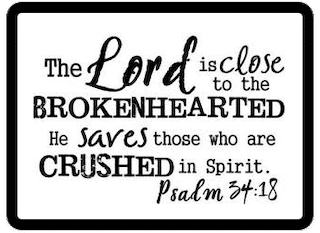 20 He keepeth all his bones: not one of them is broken.

21 Evil shall slay the wicked: and they that hate the righteous shall be desolate.

22 The LORD redeemeth the soul of his servants: and none of them that trust in him shall be desolate.

David, in the person of Christ, prayed against his persecutors: prophetically foreshowing the punishments that shall fall upon them.  Tasting the Lord, desiring life, and being broken before Him.

The Warrior Creed in the Akkadian Epic of Erra and Ishum

Peoples of the ancient Near East understood the brutality of war from firsthand experience.  In the Bible and elsewhere we see reflections of the dread of its destructiveness, but we also see examples of a “warrior creed” that glorified war and conquest.

The Akkadian epic or Erra and Ishum focuses on Erra (also called Nergal), a god of war, plague and the underworld.  In the myth, Erra had been lethargic but threatens to arouse himself and massacre the “black headed people” (i.e. the Mesopotamians).

Erra is urged on by a group of seven warrior gods, but in the end the situation is defused by the counsel of the god Ishum.

Of particular interest is the manner in which the seven warrior gods urge Erra to rouse himself for battle.  They inform him that staying home is effeminate and childish; the battlefields is the province in which a man gains honor.

The fancy cuisine of the city, they claim, cannot begin to compare with food roasted over embers out in the field or to water drunk from a skin.

Furthermore, it is a disgrace to allow weapons to rust or to become covered with cobwebs.  They also exhort Erra to slaughter his opponents and thus to terrify the world.  Their words probably reflect the militaristic ideology of actual Assyrian soldiers – a perfect example of a warrior creed.

Psalm 35 is strikingly different: a prayer by David for God’s help in battle.

Nevertheless, the psalm offers a helpful point of comparison because it illustrates the ideology of David, who was also a warrior.  There is no glorification of brutality here; to the contrary, David condemns those who declare war without just cause (vv 19-21).

As elsewhere in the Psalms, David appealed to God’s justice.  Most significantly, by pleading for God to intervene on his behalf, David repudiated the notion of gaining glory for himself by his own belligerence or aggression.

This site is free and always will be.  Donations are not needed to use this site but always appreciated.  Thank you. Curt Stowell