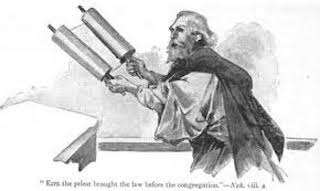 Ezra was a priest, scribe, scholar, and knowledgeable in the Law of Moses and laid the temple foundations in 536 B.C.
He was one of the most influential religious leaders in the history of the Jewish people.

His father was Seraiah, a descendant of Eleasar, the son of Moses’ brother Aaron.  Ezra, a descendant of Judah, was the father of Jether, Mered, Epher, and Jalon.  His son Mered married Bithiah, daughter of the Pharaoh of Egypt

In the seventh year of the reign of Artaxerxes, king of Persia, Ezra asked the king for permission to return to Jerusalem together with any other exile who also wished to do so.

The king gave his approval of Ezra’s request, but he also gave Ezra a written authorization, as well as gold and silver to be offered to the God of Israel in Jerusalem, and ordered that all the governors of his provinces to render full cooperation to Ezra and forbade them to demand any toll, tax or custom duties from him.

In addition, the king gave authority to Ezra to set magistrates and judges in Jerusalem.  Artaxerxes would have gladly provided an armed escort, but Ezra didn’t ask for it because he had assured the king that God would protect them.

Ezra left Persia with a few thousand men.  On the way, he realized that there were no Levites with him and sent messengers to Iddo, the leader of a place called Gasiphia, requesting him to send Levites to serve in the Temple in Jerusalem.

After traveling for five months, the returnees arrived in Jerusalem.  Ezra was shocked to find that the people had been intermarrying with foreigners.  He assembled all the people under threat of confiscating the possessions of anybody who would not come to the assembly and forced them to promise to divorce their foreign wives, a process which took about three months.

Thirteen years later, Nehemiah, named governor of Jerusalem, came and rebuilt the walls of the city.  After the work was finished the entire population of Jerusalem assembled in the square before the Water Gate and Ezra, standing on a wooden pulpit, read to the people of the Book of the Law of Moses, from sunrise till noon.  The priests and the Levites explained the teachings to the people, who cried and wept, until the Levites told them to rejoice and not to be sad for this was a holy day.

On the next day, the leaders of the people, the priests, and the Levites met with Ezra to study the books of Moses.  They read that God had commanded the Israelites to celebrate the Feast of Booths, which has not been done since the days of Joshua.  The people immediately went to the fields, brought back branches of trees and built booths on their roofs, in their courtyards, and in many public places.

The story of Ezra is found in the book of Ezra.

This site is free and always will be.  Donations are not needed to use this site but always appreciated.  Thank you. Curt Stowell